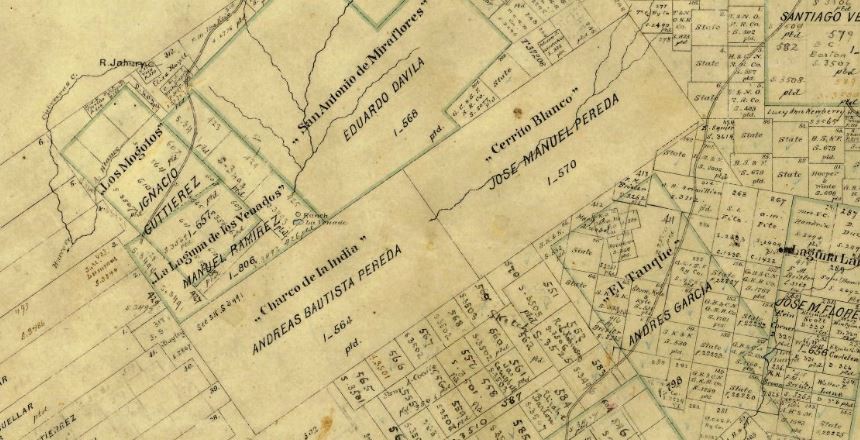 Historical documents are more than just the sum of their parts, ink and paper. They are imparted with a figurative sense of time gone by because of who has touched them, what they describe, and where they have been. In some cases though, documents are literally stained by history.

One such document lies tucked away in the Texas General Land Office’s Archives, within the vast collection of land titles issued by Spain and Mexico known as the Spanish Collection. This document, meticulously hand-written on heavy linen paper and stamped with the treasury seals of two Spanish kings, details the process two men undertook to claim land in Spanish Texas.[1] The difference between this document and the thousands of others in the Spanish Collection is that this particular document is stained through with blood. The origin of the blood remains a mystery, but there was enough of it to soak through more than 15 pages of the document after pooling in three spots.

Normally, Spanish land grant titles traveled many miles between the grantee’s place of residence and Mexico City before the grant received a confirmation and the process was finalized. In this case, however, the title is a testimonio — a certified copy of the original — made at Revilla soon after the issuance of the title. In 1902 this testimonio made its way to the archives of the Texas General Land Office, many years after the confirmation and patenting of the land. As noted in the certified copy, the title tracks the tedious tasks required to obtain a Spanish land grant immediately prior to Mexican independence.

In 1808 Andrés Bautista Pereda and his son, José Manuel Pereda, began the process of applying for a land grant of more than 17,000 acres in what’s now Zapata County. The men — who owned cattle — needed to present reliable witnesses who would testify that they had sufficient means to make use of the land. Subsequently, a preliminary survey was made that described how the surveyors had walked the property with the father and son for three days, taking note of the flora and fauna. The 1808 description of the property is vivid:

“…the plants are chaparral, huisache, mesquite, and retama, and such vegetation is so plentiful that it makes the land uninhabitable…The animals are tigers, leopards, wolves, coyotes, rabbits, hares, deer, antelope and snakes, and these last named are abundant.”

Based on their observations, the surveyors valued the land at 10 pesos per sitio, an area of 4,400 acres. After some negotiation with the authorities, the Peredas agreed to pay an additional 12 pesos for the land, plus other fees, for a total of 99.5 pesos for the entire 17,000-acre tract. The two men obtained the land in 1810 and were then required to settle and cultivate it within a year, or lose it. And, although it is not mentioned in the testimonio, as part of the final process of taking possession of the land, the local authorities would have instructed the Peredas to pull grass, dig the earth, walk the land, throw stones, and place fixed landmarks at the corners to affirm their ownership of the tract.

As time passed and the sovereignty of South Texas changed from New Spain to Mexico, to the Republic of Texas, and finally the state of Texas, the subsequent owners of the property suffered decades worth of bureaucratic hassles in order to confirm the land under the state. This process is noted in the accompanying documents of the testimonio as well as in the first-class headright files for Andrés Bautista Pereda and José Manuel Pereda pertaining to this tract.[2]

Following the Treaty of Guadalupe Hidalgo, the land grants in the Trans-Nueces Strip were to be confirmed by the state and remain in private hands, unless they had been abandoned. For some grants, the process was relatively simple and many had received a patent by the early 1850s. Others, however, had to go through the courts in order to be confirmed and entered into the record as privately-owned land. The Pereda tract was eventually confirmed by the District Court of Webb County in accordance with the provisions of an 1860 legislative act and patented in 1872.

By the time the document made its way to the General Land Office Archives in 1902, it had been folded in three, as if to fit into the inside pocket of a man’s coat. Although little else is known about the purported blood stains, the document is a fine example of the processes that early Texas settlers experienced when applying for land grants under Spain.